Dolphin (mahi mahi or dorado) fishing is a summer time blast along the banks of the Cayman Islands. They are one of the world’s most popular gamefish, and it’s no mystery why that is. They are spectacularly colored, fight hard and jump when hooked, and taste delicious.

When we talk about dolphin, we are talking about the dolphin fish, known by most people from their Hawaiian name, mahi mahi or by their Pacific coast name, Dorado. These fish are fast growing and they are prolific breeders. Some biologists think of them as the rabbits of the ocean. Where two or more are gathered, there will soon be lots of babies, and these babies grow at an amazing rate. If you consider the fact that the average lifespan of a dolphin is five years, and that catches over thirty pounds are common, you can see how fast they grow.

Words and pictures cannot adequately describe the beauty of a fully lit up Dorado in the water. They can change the intensity of their colors based on their mood and unfortunately their color usually fades almost immediately after they are brought on board a boat.  By the time they get back to the Barcadere Marina, they are usually a dull gray color and you would have a hard time convincing anyone that they are one of the most strikingly colored fish in the ocean.

Males, often called “Bulls”, have a large distinctive flat forehead.  They grow bigger than the females, which are called “Cows”.  Most fish over 25lbs or so will be male.

Where do we Fish?

Dolphin are pelagic – that is they roam the open ocean. They prefer the warmer waters of the Gulfstream, but you can find them in plenty along the rich fishing banks that linger just beyond the coastal waters of the Cayman Islands. Everyone has their favorite fishing spot with some almost too convenient to believe.

This famous location, 12 miles offshore, offers big catches of wahoo, mahi-mahi and tuna. The Cayman Banks are coral pinnacles which are found in the middle of the sea, rising from 10,000 feet of water to barely 40 feet beneath the surface. This deep sea experience is a fisherman’s dream. 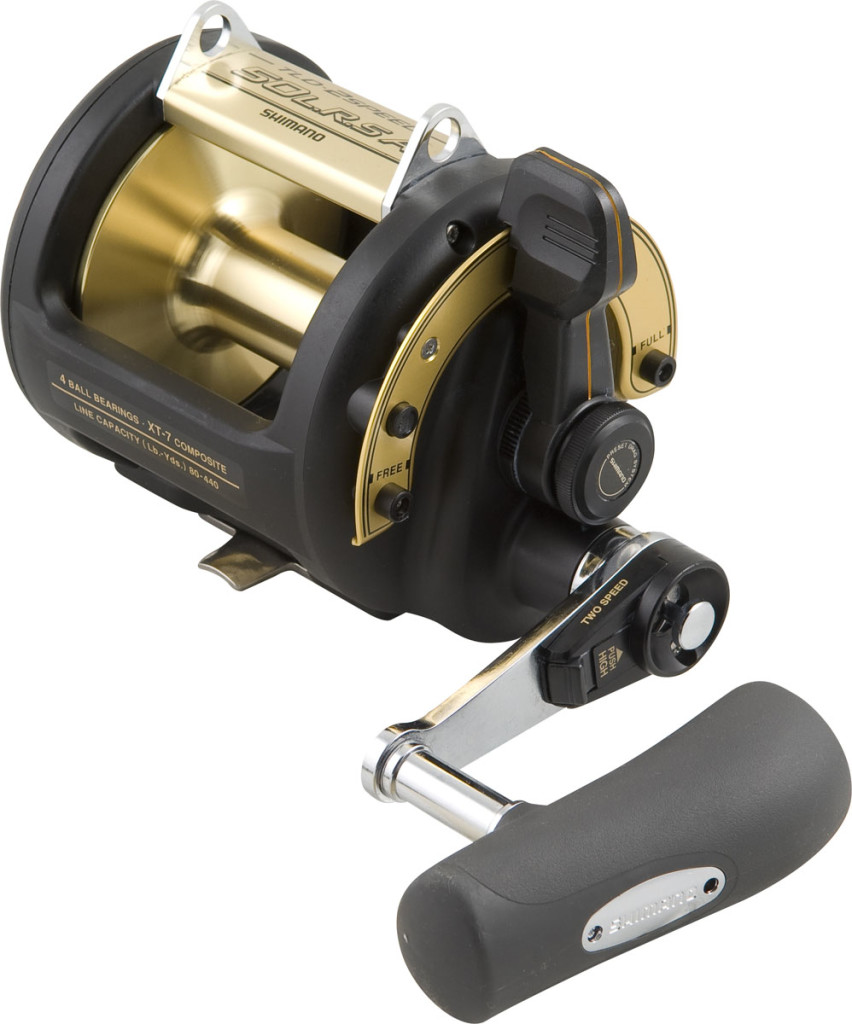 Most anglers will have the following tackle on board when seeking dolphin:

What Bait to Use

There are many varieties of artificial baits on the market, all designed to catch dolphin, and all of them do just that. Most Dorado can be caught on lure and ballyhoo combo with trolling lures such as Bluewater Primo vinyl skirts (available in all colors of the rainbow at Kirk Marine for under $10!) meant for Marlin or Sailfish or feathers meant for Tuna.  They also hit bubble heads and trolled plugs such as Rapalas.

Tip: Once a school dolphin is hooked and brought to the boat, leave it in the water. The rest of the school will usually follow and stay nearby. Chum with cut bait will bring them in close and put them in a frenzy, For a wild and exciting experience start casting your spinning rods/fly rods with cut bait or artificial lure. Usually they will hit so fast you just have time to set the hook as it hits the water.

How Do I Know When to put my Lines Out?

Dorado are an open water species that often associates with floating debris (floatsam) such as logs. If you are in an area with Dorado any floating object is worth a look as it may concentrate the fish. If you have anything to chum with that can really get them going. They use flotsam to shade themselves from the sun. Weedlines form in a rip that can be several miles long. You will find boats trolling along both sides of a long weed line. Just get in line and follow the leader. Sometimes everyone catches fish this way and sometimes no one catches fish. That’s why they call it fishing!

Always, always, always look for the birds. Sea birds like gulls and frigate birds follow schools of dolphin waiting for them to find a school of baitfish. You can spot a school of feeding fish by watching for a flock of diving birds. As you move to the birds, you may find that the feeding fish are not dolphin. Never mind that – just get some baits out. Larger dolphin will follow schools of other fish – like skipjacks or bonito – and feed along with them.

The Frigate bird holds a special place in a dolphin angler’s heart. They will find and lock onto a big bull or cow dolphin and follow them high overhead for miles, waiting for them to feed. If you spot a cruising frigate bird, make an effort to stay with it for at least a while. This is where most of the really big dolphin are caught.

While you do need a boat to find and catch dolphin, they are the easiest blue water fish to catch for the average angler. There are no really heavy duty tackle requirements, and the dolphin are usually quite eager to eat your bait – even if it happens to be presented a bit wrong. They generally cooperate and make you look good!

Kirk Marine has everything you need to reel in that prize winning Mahi Mahi! We’ve got bait from Ballyhoo and Flying Fish to Squid, Sprats and Sardines. Don’t forget the Chum! and for lures anything from trolling res, plugs, casting lures, jigs and skirts. There’s wax thread, lead, terminal tackle and a wide variety of trolling and spinning rods. Visit Kirk Marine on Eastern Avenue and stock up on all of your dolphin fish gear!

This website uses cookies to improve your experience while you navigate through the website. Out of these cookies, the cookies that are categorized as necessary are stored on your browser as they are essential for the working of basic functionalities of the website. We also use third-party cookies that help us analyze and understand how you use this website. These cookies will be stored in your browser only with your consent. You also have the option to opt-out of these cookies. But opting out of some of these cookies may have an effect on your browsing experience.
Necessary Always Enabled
Necessary cookies are absolutely essential for the website to function properly. This category only includes cookies that ensures basic functionalities and security features of the website. These cookies do not store any personal information.
Non-necessary
Any cookies that may not be particularly necessary for the website to function and is used specifically to collect user personal data via analytics, ads, other embedded contents are termed as non-necessary cookies. It is mandatory to procure user consent prior to running these cookies on your website.
SAVE & ACCEPT